Most deeply-felt thanks to all who attended my acapella vocal concert! Although my official graduation happened in December, I’ve spent considerable time at Fairview this semester, rehearsing with my wonderful friends, visiting teachers, wrapping up some pottery projects, and generally adjusting to my new life as a young adult. It’s been a joy to recap all the “filler acts” I’ve prepared and performed during my years at Fairview – greatest hits from the 1950’s and 60’s, including tunes like “My Girl,” “Unchained Melody,” favorites by Billy Joel, and more. 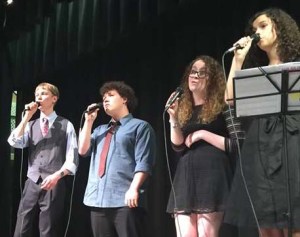 In the spirit of “Music Breaking Barriers,” the program opened with a screening of my TED-talk and concluded with the world-premiere of a choral composition that my mom wrote especially for me and my group of singers. Her years of being my mom inspired both the poetry and the music – it’s called HOPE: A Meditation on Autism – and she told me, “There’s a song in every heart, even if someone can’t express themselves in words, as is so often the case with autism.” (Find the lyrics and a video link below.) 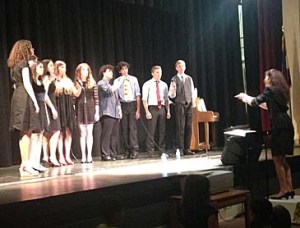 The piece was commissioned by a non-profit called, Chase the Music, as a gift to our autism community – and thus the performance was both a graduation concert and a sensory-friendly event (see previous blog entries for more on this topic.) Kyle Dyer of Channel 9 was so taken by the idea that she invited me and my mom for an interview: http://www.9news.com/entertainment/music/benjamin-and-the-sensory-friendly-concert/211988473  It’s truly a privilege to be using the power of music for a social good… 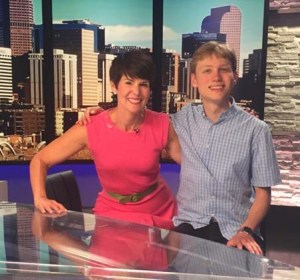 We had a fabulous crowd – about 200 people, in spite of the busy-ness of the Memorial Day weekend – and there was such joyful and celebratory energy; a truly inclusive and welcoming environment for all. My friends and I were on cloud nine, singing totally from the heart, loving this music that has stood the test of time, loving being part of a “world premiere” experience, loving the prolonged standing ovation – thanks again for sharing this special afternoon with us!

HOPE – A Meditation on Autism

Hope…
Hope for a future unknown.
Hope—for to reach the stars,
Someday…

Search…
Searching for answers,
Both grieving yet trusting
That answers will come.

Willing love and joy
To bring wings, for soaring
Through turbulence,
Sailing when smooth.

HOPE – A Meditation on Autism            words/music by Malva Freymuth-Tarasewicz