Spending an entire week in Camphill Copake allowed us two forays to nearby, smaller Camphill communities where Benjamin also gave his autism presentation to enthusiastic audiences. (If you are new to the Camphill model of living support for differently-abled persons, please see https://benjaminbreakingbarriers.wordpress.com/2019/11/13/new-york-new-york/ )

Camphill Triform is a 15-minute drive from Copake, serving those in their late-teens and early 20’s making the gradual transition from high school to young adulthood. The 500-acre farm community consists of two separate plots, with a woodsy trail connecting one to the other. Ten houses serve as residences, and day-students are welcomed also. The feel is of a “miniature Camphill Copake” with cows grazing under the trees, organic gardens still sporting a lot of autumnal kale, a fragrant bakery adjoining the artistically painted recreation hall lobby… Of the various artisan studios, I was most impressed by the beautiful weavery building of traditional timber frame construction using nary a nail or screw – tight-fitting hand-cut joinery and large wooden pegs securing adjacent timbers! Falcon Hall, where Benjamin performed, is intimate and beautiful, and hosts a curriculum of stimulating afternoon classes as well as varied evening gatherings, supporting the continued learning and social development of the residents and day-students. 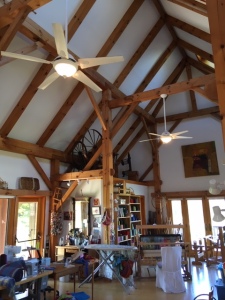 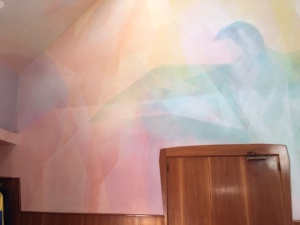 Camphill Hudson   A 30-minute drive westward from Camphill Copake, the quaint town of Hudson nestles right up to the banks of the grand Hudson River. This little town—now a favorite get-away for stressed New Yorkers—was a bustling seaport for many years, originally laid out by Nantucket whalers in the late 1700’s. Hudson’s “Warren Street” charmed us with its historic buildings, cute shops, old churches; a few blocks up from the river, we found the central gathering-place for Camphill Hudson, called “Solaris.” It is a four-story building in a line-up of picturesque row houses, its appealing street-level windows inviting strollers to enter the Gift Shop of Camphill-produced artisan crafts and treats. 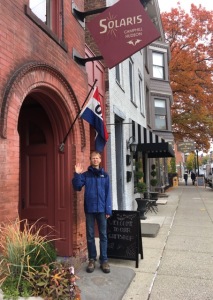 Benjamin and I joined for a community meal in the fabulous kitchen of the basement level, and then explored the upper stories, where Benjamin’s evening performance would take place in a lovely space with pitched-roof ceiling. Stepping out onto a cozy terrace, we looked across to the 1800’s brick warehouse where Etsy has its primary computer support center.

Camphill Hudson is one of the few “urban camphills,” with nine living spaces distributed within walking distance of the “Solaris” hub. Here, residents of various ages and disabilities can choose to live in one of the Camphill houses with neuro-typical house-leaders, or, if capable of greater independence, can live in an apartment with co-worker assistance as needed. By partnering with local organizations, meaningful work situations have been established throughout the town of Hudson, and residents also contribute to the smooth operation of this urban Camphill and its administrative offices.

We were particularly excited to learn of the integrated theater group (Camphill Hudson Players) that made their debut to sold-out Hudson crowds in 2018, performing original shows of their own creation. They have taken their shows on tour as well, even foraying into New York City! Benjamin has, for years, been part of an integrated group called “Tapestry,” where neuro-typical peers support the primary, special-needs actors. (New to this blog? Benjamin has played leading roles such as Horton in “Seussical” and Albert in “Bye Bye Birdie.” See https://benjaminbreakingbarriers.wordpress.com/2015/07/25/horton-the-elephant-in-seussical/ )

We took an afternoon outing with Camphill house-leader Thomas de Leon, visiting the nearby estate of Olana, a uniquely decorated mansion built by famous painter, Frederick Church. The views from this home, perched on its hilltop, are breathtaking, clearly chosen by the artist when he laid out his building plans. Artists have long found inspiration in the grandeur of the Hudson River valley and the neighboring Catskill Mountains. Several other famed Hudson River School painters lived in and around town, and we could look across the water to see the mansion of another famous landscape artist, Thomas Cole. 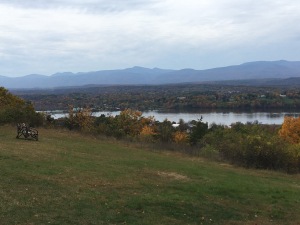 Then, back into town for a walk along the river (we saw small piers and water craft, plus a fog-horn nestled on a tiny island in midst the water), plus a rest-time and dinner at one of the Camphill houses. Once again, we were struck by the importance given to regularly cultivating reverence, gratitude, and connection. At every Camphill house we’ve visited, meals are shared around a communal table, starting with a lit candle, a taking of hands, and a sung grace. Such living in an extended-family type household allows for a sense of nurturing that is greatly missing from many homes nowadays.